I am a retired Family Practice Physician and former Clinical Director of the Sacramento Appointment and Advice Call Center.

I have been interested in photography for the past ten years. I have traveled three times to Africa including visits to Kenya, Tanzania, Namibia, and Botswana. I have also photographed in Antarctica and in the Pantanal in Brazil. I have traveled and photographed extensively in the Southwest portion of the US as well as the Eastern part of California. My next trip is to Alaska to photograph brown bears. 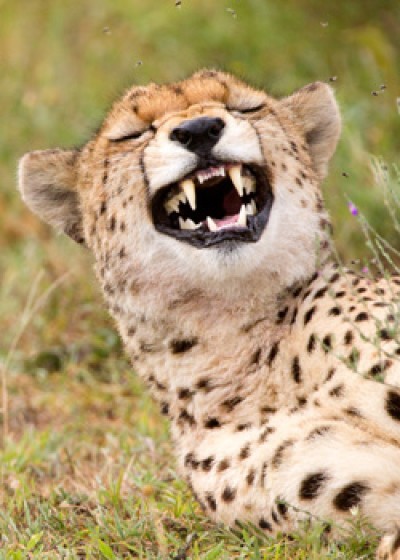 This photo was taken in Tanzania in 2010 with a Canon 7D EOS digital camera and a 500 mm lens with a 1.4 extender giving an effective magnification equivalent to a 1100 mm lens (500 + 40 % for the extender + 60% magnification for the smaller sensor in the 7D). The aperture used was 5.6, at 1/2000, ISO 800 and with the camera mounted on a tripod modified for shooting from an open top vehicle. Minor Photoshop adjustments were made for contrast and sharpening.

This photo of a grinning cheetah was taken while on a photo safari to Tanzania organized by professional photographer Todd Gustafson (more photos and information is available on his Web site: www.gustafsonphotosafari.net). I, along with my wife, was in a location called Edutu, which is well known to photographers for the variety of African animals found in that area. This cheetah was one of three brothers lying in the open scrub and grassland, fairly oblivious to the one or two Toyota Land Cruisers that were stopped to take photos. We stayed with them for about 30-60 minutes capturing different poses. Although I hoped to see them in a hunting mode, they were just hanging out in the afternoon sun. It was great to be able to photograph the three together. This photo comes with the flies that seemed to circle around them constantly.