I am a retired Family Practice Physician and former Clinical Director of the Sacramento Appointment and Advice Call Center.I have been interested in photography for the past ten years. I have traveled three times to Africa including visits to Kenya, Tanzania, Namibia, and Botswana. I have also photographed in Antarctica and in the Pantanal in Brazil. I have traveled and photographed extensively in the Southwest portion of the US as well as the Eastern part of California. My next trip is to Alaska to photograph brown bears.

For more information about my photography feel free to contact me at hahnsk@sbcglobal.net. 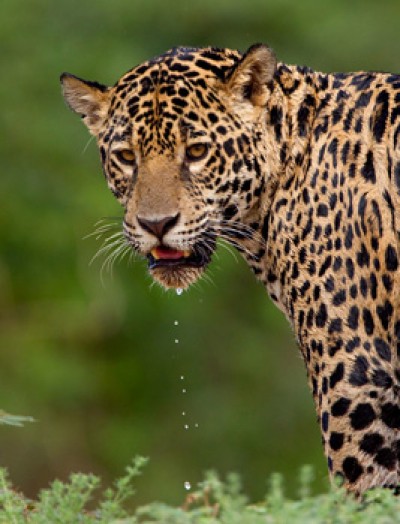 This photo was taken with a Canon EOS 1D Mark IV camera with a 500 mm lens plus a 1.4 teleconverter for an effective focal length of 700 mm plus an additional magnification of 30% for the small camera sensor (total of 910 mm). This photo was shot at a speed if 1/1600 at an aperture of 6.3 and at an ISO of 800. This camera lens combination was used handheld while in a small boat held against the current by the motor.

My wife and I were in Brazil in the Pantanal to photograph jaguars, hopefully, and the abundant bird population. We were on a photo safari with a group of eight photographers led by Todd Gustafson who is a professional photographer (more photos and information is available on his Web site: www.gustafsonphotosafari.net). We stayed in a very basically outfitted houseboat on the Cuiaba River. Each day we would spend at least eight hours on the river in a small four-to-seven-person boat with a driver seeking to find the Jaguars down by the river’s edge. Sightings of jaguars are not in any way guaranteed. You have to be at the right place and passing by at the right time to see these big cats and we spent many hours looking but not seeing these beautiful animals. In the end, we were fortunate to have had opportunities to photograph four different jaguars seen on a total of six different occasions. Not everyone in our group had this many sightings. In one case a jaguar entered the river right in front of our boat and swam to the other side. From what we were told, this is a rare occurrence.

The photograph is of the male of a pair of Jaguars that we saw as we headed back to the local port for our return home. The two jaguars were in the water and then climbed the riverbank together. I took this photo just as the male turned back to look at the river before heading back into the jungle. This photographic opportunity lasted only a few seconds. I was very pleased with the results.